The Fictional League Creation Wizard walks you through the steps required to create your own completely fictional baseball universe:

In Step 1 of the Fictional League Creation Wizard, you define the structure of your league: how many subleagues, how many divisions, and how many teams you will have. 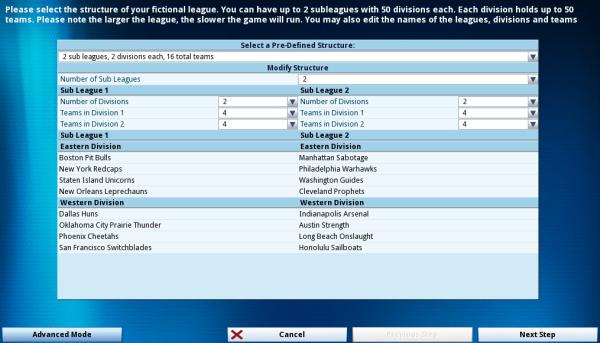 At the top of the screen is a drop-down where you can select predefined league structure. The Fictional League Creation Wizard has a set of thirteen predefined structures. These are just starting points; you can still adjust the actual league structure if you wish! Next, adjust the number of subleagues, divisions, and teams in your league, using the drop-downs. As you create a structure, OOTP will randomly select cities and nicknames for your team. You'll be able to edit these later. You can have:


Note: The more teams your league has, the more slowly it will perform. Bear that in mind, particularly if you have an older computer. When you are done, click Next Step.

In Step 2, you define the league nation for your league and customize the names of your leagues, subleagues, divisions, teams, and nicknames. 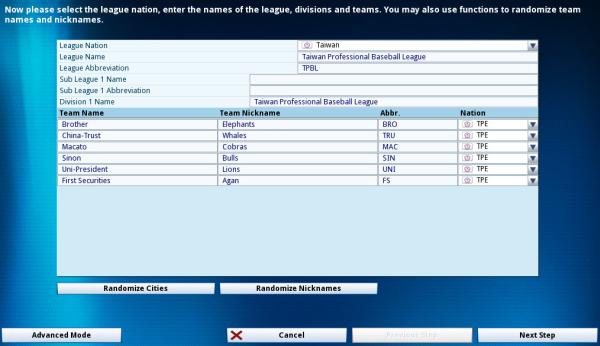 First, select a League Nation. Each league must have a home nation. OOTP comes with a list of every nation in the world today. However, for those who want to create a totally fictional world, the nations used in the game are customizable. See Nations, Cities, and Player Origins for more information on customizing nations. Nation selection affects the nationality of players and personnel in the league but has no other impact. For example, creating a U.S. league won't automatically create 'better players' because the level of baseball is higher in the U.S. than in other countries.

Use the rest of the screen to customize your League Name, League Abbreviation, and customize the subleagues, abbreviations, and any team names and nicknames. You can click the Randomize Cities or Randomize Nickname buttons at any time to have the computer recreate all team names and nicknames. These names and abbreviations are used extensively in the game in reports and news articles, so be sure to pick something you like. See League Name Setup for more important information about league name setup. When you are done, click Next Step.

In Step 3 of the Fictional League Creation Wizard, you decide whether or not you want minor leagues.

Note: Once you have advanced past Step 3, you cannot go back without cancelling the league you are creating. If you think you have made a mistake, you must cancel out of the wizard and start over.

In Step 4 of the Fictional League Creation Wizard, you make some decisions about drafts and initial player population. 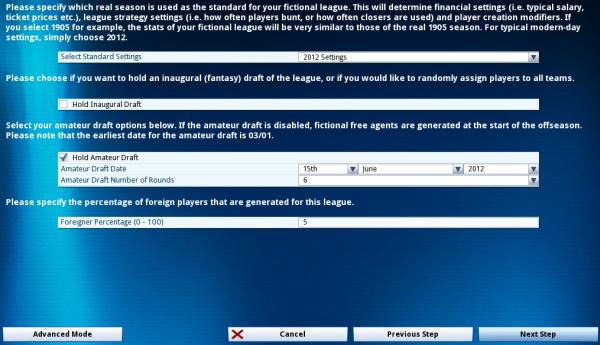 First, decide which real season is to be used as the standard for your fictional league. Year standards determine financial settings (such as typical player salaries) and league strategy settings (such as how often players bunt). For example, if you select 1905, the financials and statistics of your league will be very similar to those of the real 1905 MLB season.

Next, decide whether you want to hold an annual amateur draft for first-year players, and define the draft date and number of rounds. If you do not hold an amateur draft, the game will create fictional players each offseason so that your league does not run out of players.

Finally, select the percentage of foreigners in your league. By default, 70% of the players in your league will be of the nationality of your selected League Nation, and the remaining 30% will be chosen from other nations. When you are done, click Next Step.

In Step 5 of the Fictional League Creation Wizard, you define schedule, All-Star Game, and playoff options for your league. 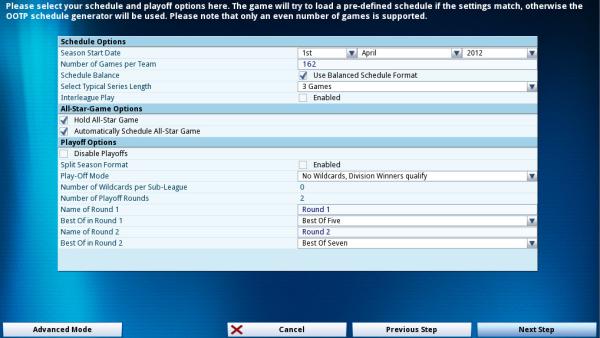 First, select your schedule options. Choose a start date for your season and the number of games each team will play. You can also decide whether to use a balanced schedule, how long the typical series should be, and whether interleague games will be scheduled. See here for more detailed information about schedule options.

Next, select options for the All-Star Game. You can choose to have an All-Star Game, or not, and you can choose whether or not to have the game automatically scheduled. See here for more detailed information about All-Star game options.

Finally, choose your playoff options. You can disable playoffs entirely, use split-season playoffs, or choose a number of different playoff configurations. See here for more detailed information about playoff options. When you are done, click Next Step.

In Step 6 of the Fictional League Creation Wizard, you define settings for the fictional face generator for your league. 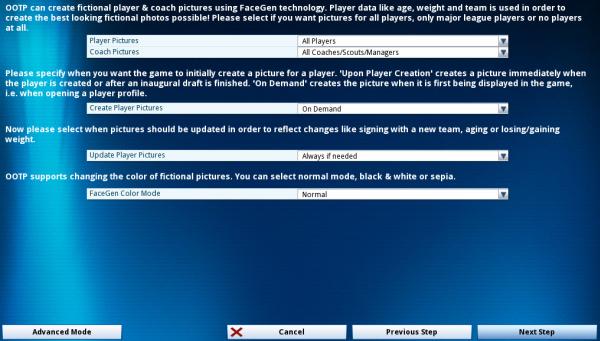 First, decide which of your players and coaches should receive fictional pictures, using the top two drop-downs. Next, specify when you want the game to create player pictures. You can have them created at the time players are created, or on demand. Next, define when pictures should be updated to reflect changes, such as to account for aging or team changes. Finally, choose the type of pictures you want to use. You can choose from Normal (full color), Black and White, or Sepia.

For more detailed information about fictional picture options, see Fictional Picture Options. When you are done, click Next Step.

In Step 7 of the Fictional League Creation Wizard, you define your manager identity and a name and starting year for your file. 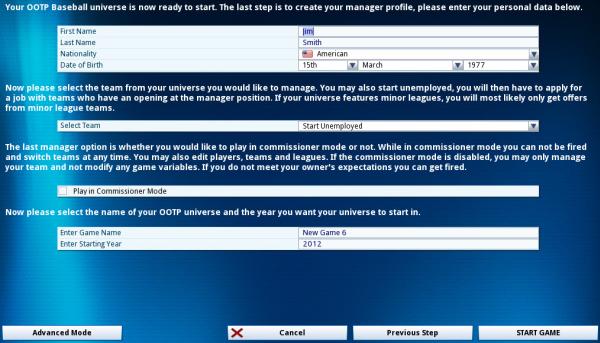 First, select a name, nationality, and birth date for your manager. Next, select a team to manage. During league creation, you can choose to manage any team in your league. You can choose to start unemployed, but be careful - once you start the game, you are at the mercy of team owners, who might not want to hire a greenhorn like you! Read more about human manager identities in OOTP for more information.

Finally, enter a name for your saved game, and select a starting year for your game.

When you are done, click Start Game! OOTP will process all the information you have selected and drop you onto the Manager Home Screen screen. If you want to add more leagues into this world, you can do so through the Game Setup option (Game menu >> Advanced section >> Setup and Options).