Once you are into an OOTP game in Play-by-Play mode, there are several different screens to look at, but only three pages on which the actual gameplay takes place: the Broadcast, Webcast, and 3D views. We will get to those in a minute. Regardless of which screen you prefer, though, the basic Play-by-Play Controls remain the same, so before we describe those two separate screens, let's walk through the controls! 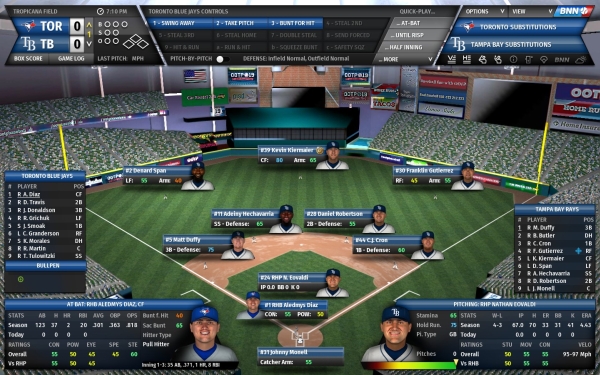 The Play-by-Play Controls live at the top of the broadcast screen.

After the current play is completed, click your mouse button or press any key to continue to the next play. Play-by-play continues in this fashion until the game is completed. While the Play-by-Play Control pane can only advance play one pitch or one play at a time, the Quick-Play Bar across the bottom of the BNN Broadcast and BNN Webcast pages allows you to advance the play of the game more quickly:

With the Quick-Play Bar, you can immediately jump to the end of the current at bat, the current half-inning, the current inning, or the entire game. You can also leap forward to the start of the inning of your choice. You can also save mid-game and return to the main game area. You can come back and continue the game at a later time.

In OOTP, you can choose to play out your games in two different modes: One-Pitch Mode or Pitch-by-Pitch Mode.

Unsurprisingly, it takes significantly longer to play out a game in Pitch-by-Pitch Mode, but Pitch-by-Pitch Mode offers a greater degree of strategic control. The good news is, you can switch between these modes at any time, even halfway through an at-bat or an inning, by using the button in the lower right of the Play-by-Play Controls pane.

The following options are available when you are controlling the team at bat:

The following options are available when you are controlling the defensive team.

In addition to the defensive game controls, when you are managing the team in the field, you also get access to two special drop-downs that allow you to control the positioning of your defense.

You can select from the following options for positioning your outfield: