Before you can understand what choices to make in creating a game, it helps to know some of the terminology used in OOTP.

A saved game is one 'universe' of baseball in OOTP. A saved game could contain one league, five leagues, one league with multiple 'subleagues,' or any other combination of leagues and subleagues. In fact, in OOTP, there is no limit to the combinations of leagues you can put into one saved game, other than your computer's performance. Each game you create generates a distinct directory on your computer's hard drive, located in data/saved_games. Saved game directories end in .lg, for example, My League.lg.

A league consists of one group of baseball teams, players, and the rules for how that league operates. A saved game can contain one or more leagues. OOTP supports four types of leagues: standard leagues, historical leagues, fictional leagues, and imported leagues (from previous versions of OOTP). Each of these is described in League Types. Although there is no limit to the number of leagues your saved game can have, the more leagues your saved game has, the higher the toll on your computer's memory and hard disk space.

A subleague is a group of teams within a league. A league can have one or two subleagues. For example, if you create a league called My League and divide it into a Northern League and Southern League, the latter two are subleagues of My League.

In OOTP, the most important reason to understand this parent/affiliate relationship is because most league settings cascade from parent leagues down to affiliated leagues. In most cases, you cannot modify an affiliated league's settings, because they are obtained automatically from the parent league.

Note: Minor league teams do not necessarily need to be affiliated with a major league team, although that is often the case.

One way to map out the relationships between these elements is shown below. 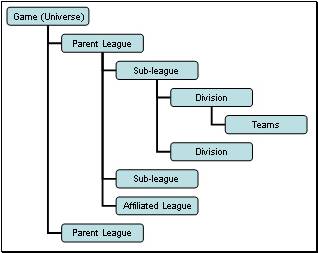 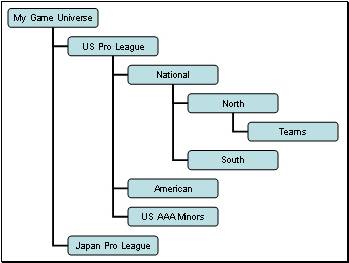