There are four types of leagues in OOTP: standard, historical, fictional, and imported. Remember that in OOTP, one saved game can contain multiple leagues. So, your saved game could theoretically contain a combination of all of these types of leagues!

Standard leagues are based closely on professional baseball leagues that exist in the world today. In standard leagues, league structure and details have been configured to match the real-world details of those leagues as closely as possible, although the player and team names are different. OOTP comes with the following standard leagues: 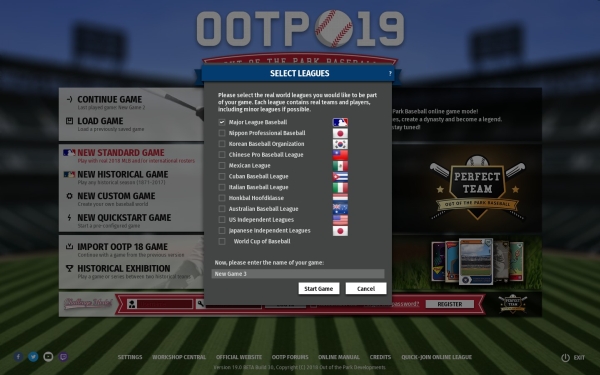 Custom (Fictional) Leagues allow you to create your own baseball universe from scratch. You can define all the details of a fictional league however you see fit, including the team names, cities, financial model, free agency, player settings, and more. For information about creating a Fictional League, see the Fictional League Wizard, or the Advanced Mode screen about Fictional Leagues.

OOTP also allows you to import OOTP leagues from the previous version of the game. See Importing Old OOTP Games for more information about which versions can be imported, and how it works.