The Player Strategy screen allows you to define specific individual player strategies that are used when you auto-play games: 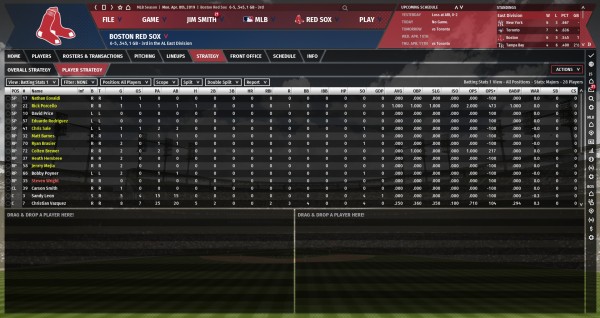 The Player Strategy screen is completely optional. Even if you do not touch these settings, the AI will do its best to manage your team effectively when you auto-play games. These settings, however, allow you to micromanage where it suits your tastes. Additionally, if you play out your games, there is no need to configure your strategy settings, since you will determine your strategy on the fly!

If you enjoyed setting overall team strategies, then the Player Strategy screen will be right up your alley. If you have a lightning-fast runner and want to give him the green light every time he reaches base, you can set that preference here. Worried that your aged starter won't last the whole season? Put him on a limited pitch count here.

The Player Strategy screen is another two-paned screen. The top pane is a player list, on which you can take advantage of OOTP's Views, Filters, and many of the Common Drop-Downs. Review those sections to get a better understanding of how to manipulate the data on this screen to suit your needs.

The bottom pane starts out blank. To set a player's strategy, drag the player onto the bottom pane of the screen. This will reveal his strategy options. There are several sections in which to set player strategies, some for batting and some for pitching. Each player has both batting and pitching settings. Of course, you don't generally need to set pitching strategies for hitters. (If you don't have a designated hitter in your league, it's a good idea to set hitting strategies for your pitchers!)

There are two ways to handle an Opener/Follower system, differing slightly in their exact mechanics:

The league-wide AI use of Openers can be set in the General Strategic Tendencies section of the Stats and AI tab of the League Settings screen.