You are here: OOTP 16 » Important Game Concepts » Tools, Functions, and Editors » Other Commissioner Functions
HOME
Other Commissioner Functions
In addition to all of the other in-game editors and special functions, players in commissioner mode also gain access to a number of other minor functions scattered throughout the game in the places that suit them the best. Generally, these options appear as additional action buttons at the bottom of the relevant page. Thisscreenwill cover all of the additional commissioner functions that can be found in the game:

Of course, in addition to these functions, commissioners also have other abilities such as forcing trades or editing draft information, all of which are described on the relevant pages of the online manual.

Commissioners can delete free agents from the Free Agents page, by clicking on the Delete all Free Agents button at the bottom of the screen. You will be asked to confirm before proceeding.

Commissioners have the ability to create fictional players from the Free Agents, Draft Pool, and Show All Players pages. For example, if your free agent pool is a little thin, a commissioner could add a handful of new players. To create fictional players, click on the Create Fictional Player button at the bottom of the page. You will see a dialog box with a number of options:

Once you have set your options, click the Create Player(s) button to have the player(s) created. The game will give you a list of the players created and their positions.

Just like creating fictional players, commissioners can also create fictional team personnel through the Create Fictional action menu on the Available Personnel page. The action menu contains different options for each different type of personnel. Unlike the Create Fictional Player option, you cannot choose a number. Personnel are created one at a time. As soon as you select a type of personnel, a person of that type is created and added to the Available Personnel page.

Commissioners have the ability to import individual historical players from the Free Agents, Draft Pool, and Show All Players pages. To import historical players, click on the Import Historical Player action button at the bottom of the page. Choose the database you wish to use. (By default, use the file historical_database.odb found in the datastats directory in your User Data location.) Then, you then go through a process very similar to that used to import an entire historical league, as described in Adding Historical Leagues. 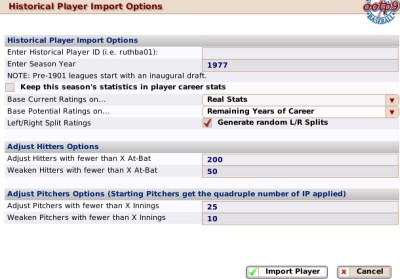 The main difference between thisscreenand importing an entire historical league is that you must know the player's unique ID, as used in the historical database. Enter this value in the first field, and then select the other options, which are described in detail in Adding Historical Leagues.

Note: One 'trick' to finding the player's ID is to visit BaseballReference.com. Look up the player you wish to import, and then check the URL string. The player's unique ID is the portion of the file name before .shtml.

Once you are done, click Import Player to bring the player into your game. He will appear on the Free Agentscreenimmediately.

Inducting Players into the Hall of Fame

Commissioners can edit any coach or personnel's strategy preferences from the Strategy Preferences page. To edit a coach's preferences, just drag the sliders as desired.

Commissioners have the ability to temporarily act as the manager of any team in the game universe. This is done through a special drop-down that appears in the top right corner of the game page, known as the Act as drop-down.

The 'Act as' feature is only designed to let you take over a team for a brief moment in time, for example to force a change of some kind. While in 'Act as' mode, you will not receive personal messages intended for the true manager of that team, for example contract reponses, trade offers, and so forth. Therefore, we recommend you do not auto-play while in 'Act as' mode.

If you want to take over a team and conduct normal baseball operations for that team, you should sign on as manager of that team by using the Available Jobs page. Once you are done managing that team, simply resign from the job, and the AI will once again take over the reins.