You are here: OOTP 16 » Important Game Concepts » League Events » All-Star Game
HOME
All-Star Game
The All-Star Game usually takes place in the middle of the season. By default, OOTP elects the top 25 players in each division or subleague - 12 pitchers and 13 position players. While real-world All-Star teams include starters at each position, OOTP selects the top players, regardless of position. So, you may find that your All-Star teams have three catchers, if your league has some truly outstanding catchers. But temper your enthusiasm when your stud shortstop makes the All-Star game! Don't think for a minute he won't consider that when his contract is up!

When the All-Stars are announced, a league news article will be posted with the rosters for each team:

You can actually play the game out yourself if you so desire, regardless of whether you currently manage a team and how that team is performing. Just go to the Scores & Schedulescreenfrom the League menu on the day of the All-Star Game, and you will have the option to manage the game:

As mentioned above, OOTP selects the All-Star participants automatically. However, if you are the commissioner of your league, or if you are playing in a solo league, you can also select the All-Stars manually if you prefer to have more control. To manually select All-Stars, use the Manual All-Star Voting menu option. This option appears in the League menu 30 days before the All-Star game:

Selecting this menu option will bring you to the All-Star Voting page: 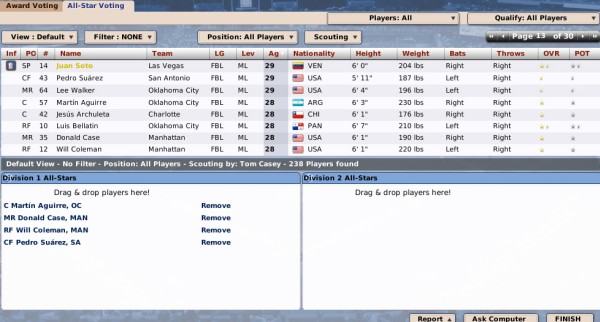