Perfect Team, first added in OOTP19, introduces a new play mode to OOTP: a collectible card game that allows you to build teams and play against thousands of other OOTP owners in online leagues, using the OOTP simulation engine.

If you're new to Perfect Team, you may want to have a look at the Tips section below before you get started - there's no way of reloading your game after a mistake here, so you'll want to avoid those mistakes in the first place! 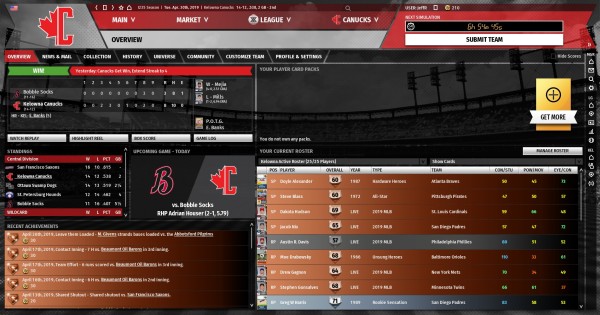 Most of the Perfect Team screens have an equivalent in OOTP and work in the same manner. However, Perfect Team operates a little differently than normal OOTP play in some respects:

During the league's regular season (Monday-Saturday), 31 league days are simulated every real day, one simulation every 30 minutes, starting at 10 AM ET and ending at 1 AM ET. On Sundays the postseason will be simulated. In addition to the regular leagues, Entry Pool leagues for new players are also running, simulating one game every 30 minutes and running non-stop until the next week begins and the teams are assigned to a regular league.

Leagues are sorted into different tiers: from the top down, they are Perfect, Diamond, Gold, Silver, Bronze, and Iron. Additionally, the Entry Pool league holds newly-created teams before their first assignment to a regular league (usually Iron, except in the first week following the game's release, where some teams may begin in higher leagues based on their Entry Pool record.) Every week, the teams with the best finishes in one level will be promoted to the next-highest one, while the teams with the worst records will be demoted down to make room for them. Teams will never be demoted out of an Iron league.

Perfect Points and cards can be acquired in a variety of ways:

"Live" cards are tied to the 2019 Major League season; if a player's performance improves or declines during 2019 from the initial card values, his ratings will change.


If you're just getting started in Perfect Team, here are some helpful tips to get you off to a winning start:

And remember, just like in OOTP, there's not a single pathway to success. Experiment with lineups and strategies, you may think of something that no one else has come up with yet!