Perfect Team adds an additional play mode to OOTP: a collectible card game that allows you to build teams and play against thousands of other OOTP owners in online leagues, using the OOTP simulation engine.

If you're new to Perfect Team, you may want to have a look at the Tips section below before you get started - there's no way of reloading your game after a mistake here, so you'll want to avoid those mistakes in the first place! 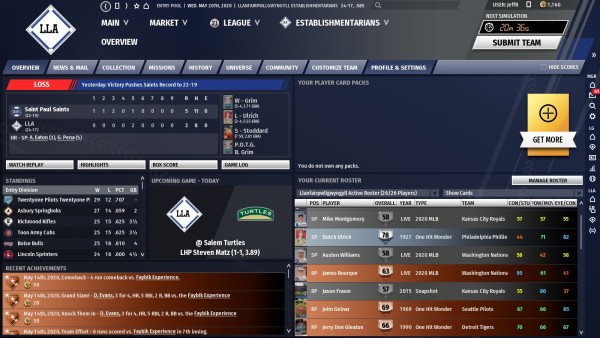 Most of the Perfect Team screens have an equivalent in OOTP and work in the same manner. However, Perfect Team operates a little differently than normal OOTP play in some respects:

During the league's regular season (Monday-Saturday), 31 league days are simulated every real day, one simulation every 30 minutes, starting at 10 AM ET and ending at 1 AM ET. On Sundays the postseason will be simulated, starting at 12 noon ET and simulating every 15 minutes. In addition to the regular leagues, Entry Pool leagues for new players are also running, simulating one game every 30 minutes and running non-stop until the next week begins and the teams are assigned to a regular league.

Leagues are sorted into different tiers: from the top down, they are Perfect, Diamond, Gold, Silver, Bronze, and Iron. Additionally, the Entry Pool league holds newly-created teams before their first assignment to a regular league (usually Iron, except in the first week following the game's release, where some teams may begin in higher leagues based on their Entry Pool record.) Every week, the teams with the best finishes in one level will be promoted to the next-highest one, while the teams with the worst records will be demoted down to make room for them. Teams will never be demoted out of an Iron league.

Perfect Points and cards can be acquired in a variety of ways:

"Live" cards are tied to the current Major League season; if a player's real-life performance improves or declines during the year from the predicted initial card values, his ratings will change.


Collection Missions expand the collecting aspect of Perfect Team in a new direction, allowing rewards to be won by collecting cards. There are two types of missions: Missions for cards, and missions for completing other missions.

Missions for cards simply require collecting specific cards. When clicking on a mission title, the expanded mission info will pop down and show you the cards that are required to complete the mission plus the reward(s). Some missions require you to collect all cards of that mission, other missions a certain number - for example, any 7 out of 12 total cards.

Once a mission is complete, you can submit the mission to our servers, you will then receive the mission reward(s) and the cards of the mission (or the selected ones for the missions which only require any X out of Y cards) get locked. Locked cards can no longer be sold or auctioned, but they still can be played as usual.

Mission-completion missions can be finished by completing a certain set of missions, getting you an additional reward: Let's say there are Mission 1, 2 and 3 and a Mission A which is a mission that includes these three missions. After completing each mission you will get their reward, and after you have completed all three, you can submit mission A and collect another reward, usually for a much better reward than those given by the individual missions. Some of the very best cards in the game can only be acquired through completing missions (or buying those cards on the auction house, if someone who's completed the mission for them wants to sell them.)


Perfect Team Tournaments are standalone competitions that allow you to pit your Perfect Team against others, separately from the regular Perfect Team league, but using your collections of cards.

You earn all sorts of rewards when you are successful in a Tournament, from Perfect Points to Card Packs to Special Edition cards - and more. You don’t even have to win a Tournament to reap the rewards, as many Tournaments offer rewards for participants all the way down to the fourth place finisher.

There are thousands of combinations of Tournaments that can exist. Here are the fundamental options that are combined to create the individual competitions:

Rewards for winning or placing highly in tournaments include Perfect Points, specific Cards, and Packs of various types.


New content will be delivered each and every week all Perfect Team season long in the form of new cards being added to the game, new missions and tournament types appearing, and other surprises!


If you're just getting started in Perfect Team, here are some helpful tips to get you off to a winning start:

And remember, just like in OOTP, there's not a single pathway to success. Experiment with lineups and strategies, you may think of something that no one else has come up with yet!