A file browser window will open. Locate the primary database file for your historical database. To use either one of the two built-in historical databases provided by OOTP (Lahman, or stat-neutralized Lahman), choose the file historical_database.odb. In default installations, this file can be found in the stats directory in your OOTP installation. This should be the default directory on this screen, so in all likelihood you're already in the right place. (If you are using another historical database, you should select the file from that database called master.csv.) Click on the file to highlight it, and then click the Confirm button. You will be presented with the Historical League Import Options page. 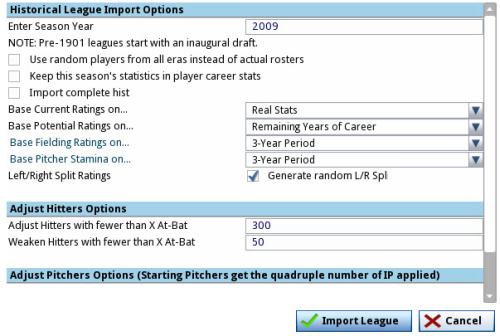 Once you are finished adjusting the settings, click on the Import League button, and your Historical League will be created. It might take several minutes to import, because the game is loading and creating ratings for each player from the season you selected. When the import is complete, you will be returned to the Create New Game page, where you can make additional adjustments to your game. You can have multiple Historical Leagues in your game, if you so desire. So, for example, you could have a 1927 league running alongside a 1977 league, and even allow players to move freely from league to league.

Note: If you are importing historical players, you should schedule your first-year player draft between October and November. Otherwise, your rookies will make their Major League debuts a year earlier than you expected. Also note: As the Historical Import Options screen indicates, pre-1901 Historical Leagues always start with an inaugural draft.

Once your league has been added, you can click on one of the leagues in the All Included Leagues box on the lower left, then go to the right pane of the screen and customize the league settings for that league. Repeat that process as many times as necessary.