The Names and Affiliations screen is accessed from the Create New Game screen during game creation. It can also be accessed later by navigating to Game Menu >> Advanced section >> Setup and Options >> League Setup tab >> Names and Affiliations tab. This screen is used to modify the names and abbreviations of subleagues, divisions, and teams in the selected league. It is also used to define "affiliations," which are relationships between teams in child and parent leagues. It is also used to set names for your annual player awards. 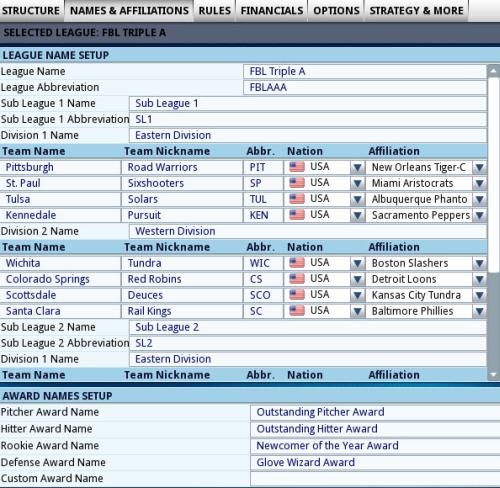 The League Name Setup section allows you to customize the names and abbreviations for your league, subleagues, divisions, teams, and their nicknames. Although names and abbreviations can be up to 49 characters in length, names longer than 30 characters often don't look very good on in-game reports and in other messages, so it's best to keep names short when possible. Abbreviations should generally be 3 or fewer characters. To edit any of the names, click in the relevant text box and make the desired changes.

The names of your teams, leagues, and subleagues are frequently inserted into the game's news articles. Since the names you input will be used verbatim, it's typically best to have your names in the following formats:

Names entered in formats different from those listed above will still work in OOTP. However, you might find that the in-game news articles sound awkward. Abbreviations longer than 3 characters are possible, but 3-letter abbreviations assure the best appearance on the various game pages and reports.

By default, all teams in your league will be from the same nation as the league. However, you can also customize this to make particular teams from different countries. A team's nation has very minor impact on things like player sentiment towards a team. A Canadian player, for example, may be slightly more interested in playing for a Canadian team. However, the effect is very small.

OOTP automatically generates awards at the end of each season for the best pitcher, hitter, rookie, and the best fielder at each of the nine defensive positions. The names of these awards can be customized here. Award names are also used in news articles, and it's best to have them in the format "XX Award", e.g. "Perfect Pitching Award". Include the word 'Award' in your award names to ensure the best-sounding news articles.

Additionally, OOTP allows one custom award. This custom award can be used for any purpose you choose; Relief Pitcher of the Year, Best Left-Handed Third Baseman, whatever you like. However, unlike the others, this award will not be granted automatically.

When you add a minor league to your game, OOTP automatically affiliates the teams in the new minor league with teams in the parent league at random. At the far right of each team name is a drop-down where you can assign each team's affiliation. To change a team's affiliation, just choose the team you want a minor league team to affiliate with from the drop-down. There is no limit to how many teams can be affiliated with one parent team. It is also possible to have some minor league teams with no affiliation. However, an unaffiliated team does not receive players from a parent league through a first-year player draft, and therefore must obtain all players through the free agent market!

Note: The affiliation drop-down appears only if you are editing an affiliated league.

Warning! If you add minor leagues during the game creation process and subsequently change the fundamental structure of the parent league, all team affiliations will be lost, and you will have to manually reassign the affiliations.