The Options screen is accessed from the Create New Game screen during game creation. It can also be accessed later by navigating to Game Menu >> Advanced section >> Setup and Options >> League Setup tab >> Options tab. 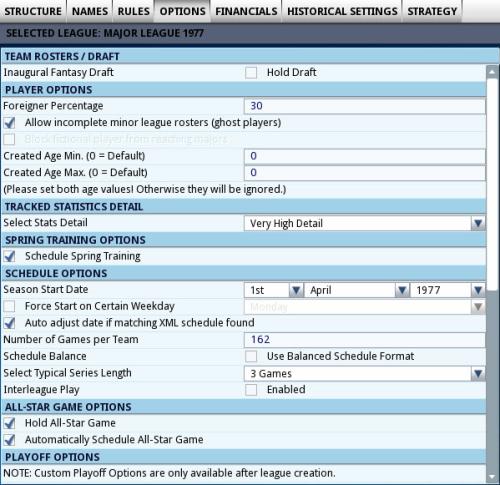 The Options screen is divided into the following sections:

If the Inaugural Fantasy Draft check box is checked, the league will begin with an inaugural draft wherein all players are entered into a giant pool from which the draft will occur. If the box is unchecked, players will be distributed among teams automatically when the league is started.

The Dynamically Evolving Leagues options are only available in fictional leagues. Enabling automatic evolution of your league allows the computer to randomly determine events that change the nature of your league. Events will never occur in the first year of your simulation, but from there on out, there is a small chance that your league will decide upon a change that dramatically alters the course of your league. You can enable or disable as many of the possibilities as you wish. Of course, all of these changes can be executed manually as well as automatically, so you need only enable this feature if you want the computer to randomly determine the path your league will take.

Player Options give you flexibility in defining your player population.

Note: Spring training settings can be changed only during the offseason or preseason.

The Schedule Options section allows you to customize the rules of league schedule creation:


OOTP has a very flexible custom schedule system that uses XML schedule files. The game comes with a number of predefined schedules that match all the standard leagues as well as a number of historical and fictional league scenarios. When you create a league, and on the first day of each preseason in subsequent seasons, the game will check the predefined schedules to see if one exists matching your specific league setup. If a match is found, that schedule will be used, and the computer will randomly juggle the team matchups from year to year. If multiple matches are found, the game will cycle through the different schedules each year. If no match is found, the game will auto-generate a schedule consistent with your league setup.

All of this allows for a realistic scheduling process that can be seamless to you as a player. However, you can also customize individual schedules after the creation of the league. Schedule files are stored, and can be downloaded from other sources and saved, in the data/schedules directory in your game directory, and end with an .lsdl file extension.

Note: The schedule options on this screen can be changed only during the offseason and preseason.

The All-Star Game Options section allows you to define how All-Star games will be handled in the selected league:

The Playoff Options section is designed to give you flexibility in determining the playoff model for the selected league. OOTP also has a very detailed customizable playoffs feature that is accessible only after the initial game creation, so be sure to review that if you are interested in customizing how your playoffs work!

League Progressing Options are typically used only in "fictional historical leagues," that is, leagues wherein you have fictional teams and players, but you want the behavior of the league (rules, finances, etc.) to remain true to the real world. These options control how your league behaves between seasons.

You can also leave Hall of Fame requirements blank. If a value is left blank, it will not be considered. If all values are blank, there will be no automatic induction. This does NOT mean that a player with > 0 in a category will be inducted! So, if you don't want any players to be inducted automatically, just erase the values from each field.

Note: The statistical values in the Hall of Fame requirements apply to statistics accumulated in the currently selected league only. For example, if a player has 250 home runs in one league and 55 in another league, that doesn't count as a total of 305 home runs for the purpose of Hall of Fame qualifications. He must meet any requirement completely within that league.