The Strategy and More screen is accessed from the Create New Game screen during game creation. It can also be accessed later by navigating to Game Menu >> Advanced section >> Setup and Options >> League Setup tab >> Strategy and More tab. 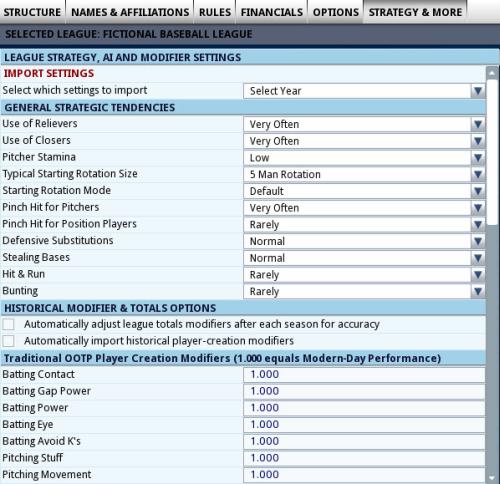 The Strategy and More screen includes some options that allow you finely tune OOTP's strategy and statistical engines. In general, the settings on this screen are pre-configured for enjoyable game play. We don't recommend changing these settings unless you have a specific reason to do so. Additionally, since these settings can drastically impact the statistical outcomes in your league, we recommend creating test leagues where appropriate to try out certain settings before you create your final league. This screen is divided into the following sections:

Import Settings allow you to specify a real-world year on which to base your league. This does not mean that you will have players from the selected year. Rather, OOTP will use this value to automatically adjust a number of different settings to make the baseball experience more similar to that particular year in the real world, including:

General Strategic Tendencies enable you to customize the 'style of baseball' that your league plays. Most options have five settings to choose from: Very Rarely, Rarely, Normal, Often, or Very Often. Exceptions are noted below.


General strategic tendencies affect the entire league. Similar settings are available at the player or coach level to change the tendencies for individuals one at a time.


Note: We strongly recommend you use these two options in conjunction.

PCMs are set as percentages, with 1.000 being the default value. To change PCMs, increase or decrease a modifier. For example, setting Batting Contact to 1.500 will generate players who are significantly better than the default at making contact with the ball. Each modifier impacts one player rating.

Traditional OOTP PCMs cascade down through a league system, so that a parent league and all affiliated leagues rolling up to it share the same player creation modifiers.

League Totals and Modifiers are the final piece in modifying your league output. While player creation modifiers affect player ratings and potential, league totals and modifiers are used to directly affect the statistical output of a league. This information is most commonly used by historical players who want overall statistical results to match a specific target.

As a more intuitive alternative, the right column contains modifiers, with a default setting of 1.000. A value of 1.000 is equivalent to modern professional baseball level. These modifiers can be used to adjust the statistical output of your league. For example, if you want 10% more home runs, instead of adjusting the home run totals, just change the home runs modifier to 1.100.

One important point to understand about the league totals and modifiers is that, unlike player creation modifiers, league totals directly affect the statistical output of the game engine. They have no impact at all on player ratings, potential, or player development. Even if you reduce your home run league total modifier to 0.150, your slugger with a 100 Power rating would still have 100 Power, and he would still hit more home runs than other players. But the numbers of home runs across the league overall would be drastically reduced.

There is also a checkbox entitled Automatically control in-game engine to match league totals (only recommended for minors). This option automatically modifies the in-game engine in a way that the stats output closely matches the entered league totals. This works fairly well, but is not a perfect statistical rendition, particularly at the lowest minor league level. It's a decent option for players who are extremely concerned about league totals looking "realistic" in the minors.

Position Modifiers affect the defensive aspect of the game. By adjusting these modifiers, you can alter the impact of different positions on your league, defensively. Each position has a range and error component. Increasing the Range modifier will increase the range of players at that position, putting them in a position to make more plays. Increasing the Error component increases the number of errors at that position, causing a decrease in fielding percentage. As usual, all values are relative to modern day professional baseball.