If you're overwhelmed by all of the options available to you, OOTP has a concept called Quickstart Games that might be just right for you!

Quickstart games are pre-built baseball universes that you can jump into with no configuration required. These games come complete with rules, teams, and players, so you don't have to worry about the details of creating your own league. You can also save your own OOTP games as quickstart games and share them with friends. For example, you could set up a league with one really weak team, and then challenge your friends to see who can take that team to the championship in the fewest number of years.

What quickstarts come with OOTP?


Many community members have created quickstart games and made them available either through our forums, or through OOTP's Add-ons Central. Look around to find a quickstart to suit your needs!

How do I load a quickstart?

From the Start Screen, click the Quickstart Game option. 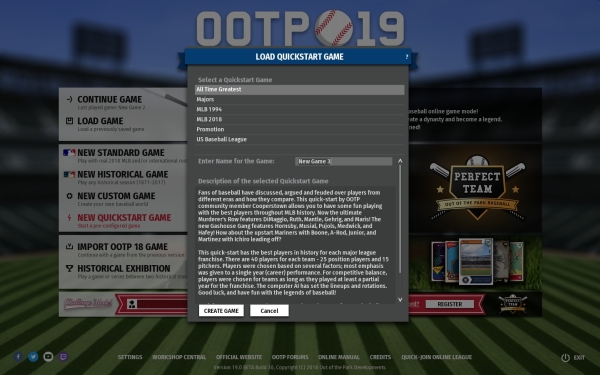 Click the quickstart game on which you would like to base your game. Enter a name for your new game, and then click Create Game. The new game will be created, and you will immediately be prompted to add a new human manager identity for your game, after which your game will begin!

How do I save my league as a quickstart?

In order to save your own game as a quickstart, first load the saved game you wish to turn into a quickstart. Then, navigate to OOTP Menu >> Save Game as Quickstart:

Once you have entered this information, click the Save button at the bottom of the screen. Your quickstart game will be saved, and will now be available whenever you choose to load a quickstart game. Although most quickstart games are created just after the creation of a league, you could just as easily play 10 years of a franchise before saving it as a quickstart game. All players, teams, settings, and history are migrated to the copy of the game you create, as well as player pictures and logos!

How do I share a quickstart game with others?

Quickstart games are saved in the data/quickstart_games directory in your OOTP install. Each quickstart game has its own directory, ending with .quick. To share a quickstart game, zip up the entire .quick folder and distribute it. The second player must then unzip the folder into the data/quickstart_games directory on his or her computer. Then, the second player can use the Quickstart Game option to create a new game based on that quickstart. Alternately, if you are sharing a quickstart with a wider audience, you can consider getting it into OOTP's Add-ons Central, where a wider audience can access it!