The Rules screen is accessed from the Create New Game screen during game creation. It can also be accessed later by navigating to Game Menu >> Advanced section >> Setup and Options >> League Setup tab >> Rules tab. 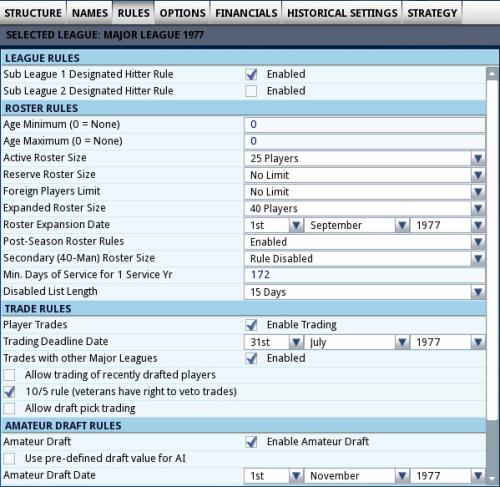 This screen is used to modify a variety of rules for the selected league, and is divided into the following sections:

The Roster Rules define how rosters are handled in the selected league. See Roster Rules and Management for more information about rosters in OOTP.


See Trading for more information on trading in OOTP.

If enabled, OOTP will implement a number of rules designed to reflect the recent 2012 Collective Bargaining Agreement. The changes that will go into effect include:


Note that these changes are "all or nothing." You cannot apply only part of the CBA rules.