OOTP now allows you to add promotion and relegation systems to your game, so teams playing at a lower level can move up to a higher-level league after the season ends, replacing the least successful team(s) at that level.

While creating a game (or in game setup after league creation), for each league you can enable Promotion and Relegation (in the "Options" sub-tab), and then select a league where promoted teams go and a league where relegated teams go. You may also select how many teams you want promoted/relegated and what league unit this number relates to - the entire league, or league sub-levels like divisions.

When setting up promotion and relegation in a game, we suggest making sure the following details for each league comply with these suggested guidelines in order to have the game operate in a realistic way:

By default, the teams selected for promotion or relegation will be determined via winning percentage (including tie-breaking via head-to-head record if needed) and the teams qualifying will be indicated by a (P) or a (R) in the league standings screen.

Once the season is over for all leagues and the offseason starts, there will be a new league event a couple of days after the last league's season ends called "Team Promotion & Relegation." When that occurs, the game will automatically move teams in case you have the "Enable automatic promotion & relegation" checked in the PR settings. Please note though, the game will NOT schedule any tie-breaker games.

During the season, the presence of promotion and relegation will change how the AI reacts and sets its team focus. For example, when in danger of being relegated, most teams will switch to win-now in order to avoid relegation at all cost, unless they already have given up and switched to rebuild mode. In a game without relegation, teams that low in the standings will typically always go into rebuild mode.

When teams got promoted or relegated, the owner will assign a new budget and the team gets a new TV/broadcast contract based on the new league. Additionally, there will be a new option for player contracts that gives players the right to opt-out of the contract in the event of the team being relegated. Most good players will request this option.

If you want a more sophisticated way to determine the teams for PR then you need to disable the "Enable automatic promotion & relegation" and identify the promoted/relegated teams manually. If this option is disabled, the league menu will show a new option if you are in commissioner mode, "Manual team promotion & relegation", which opens the screen below, in which you can specify exactly which teams move up and down. 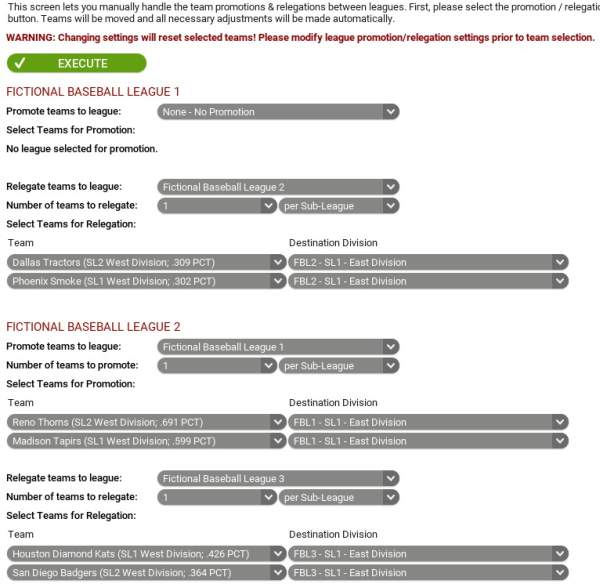 You could, for example, choose to play exhibition games/series between one or more teams at the bottom of League 1 and the top team(s) in League 2, with the winner(s) moving up to (or staying in) League 1 and the loser(s) going to League 2. Alternately, you could choose some other non-standings criteria for promotion and/or relegation - you might decide that teams need a certain size of stadium to be promoted (even if their winning percentage would normally qualify them), or demote teams for non-competitive reasons, such as profitability.

In an association with promotion and relegation, you may wish to have the First-year player drafts can share the same draft pool, with the lowest level getting the first picks. To do so, in the association setup/draft settings you can select to have the draft order be based on league level first and then winning percentage.

To better illustrate the concepts of promotion and relegation, we have created a world template with a complete 4-tier promotion/relegation chain, where all leagues have 16 teams and adjusted settings. You can find it by choosing "New Quickstart Game" from the start menu and selecting the quickstart named "Promotion."